How did the Atlantic Council end up at the center of the Burisma controversy, Trump-Russia collusion hoax, and the Ukrainian conflict?

What the Atlantic Council may or may not be is up to readers to decide, but a string of data points seem to point to an organization that has been very active in Ukrainian politics and using strong rhetoric to describe the situation and proposed actions related to Ukraine.

Unofficially, the Atlantic Council is a “militaristic influence network and think-tank, staffed with military, CIA, and their attendant politicians, and CEOs from strategic industries, like oil and media. It has strong connections to NATO and is a central part of the modern military industrial complex.” [Source]

Officially, “the Atlantic Council promotes constructive leadership and engagement in international affairs based on the Atlantic Community’s central role in meeting global challenges. The Council provides an essential forum for navigating the dramatic economic and political changes defining the twenty-first century by informing and galvanizing its uniquely influential network of global leaders. The Atlantic Council—through the papers it publishes, the ideas it generates, the future leaders it develops, and the communities it builds—shapes policy choices and strategies to create a more free, secure, and prosperous world.” [Source]

Key figures from the Atlantic Council, who were participants in the Orange Revolution, Burisma corruption allegations / investigations, and Trump campaign / administration spying, and Maidan uprising, are once again central figures in the ongoing U.S.-Ukrainian-Russian conflict.  Here’s one story.

Dr. Evelyn N. Farkas: “Dr. Evelyn N. Farkas is Deputy Assistant Secretary of Defense for Russia/Ukraine/Eurasia. She served previously as Senior Advisor to the Supreme Allied Commander Europe/Commander, U.S. European Command, and as Special Advisor for the Secretary of Defense for the NATO Summit. Prior to that, she was a Senior Fellow at the American Security Project.” [Source]

“As assistant secretary of defense, she traveled widely as part of the ongoing international standoff with Russia over Ukraine. All along, however, Russia has been a deep point of contention between the [Obama] White House and the Pentagon.” … “In testimony last year before the Senate Foreign Relations Committee, Farkas took a hard line on Russia, saying the country’s actions “stand as an affront to the international order that we and our allies have worked to build since the end of the Cold War.” “Russia’s illegal annexation of Crimea, followed by blatant and unconcealed efforts to destabilize eastern and southern Ukraine, signifies a paradigm shift for our relations with Russia,” she said in prepared testimony. “As the crisis deepens, our European allies and partners will look to the United States to demonstrate resolve and to reinforce solidarity across the continent.” [Source]

December 7-8, 2015.  Joe Biden returns to Ukraine. Biden pressures Ukraine’s then-President Petro Poroshenko to fire Shokin.  Prosecutor General Viktor Shokin had an active investigation of Burisma and its founder for corruption, which allegedly included bribes to Hunter Biden who it was hoped would get his father to use pressure from the U.S. government to end the corruption probe against Burisma. [Source]

March 29, 2016, Shokin is formally fired. [Source]  Biden later discussed the firing later with Poroshenko.  “It’s going to be critical for him to work quickly to repair the damage that Shokin did,” Biden said in the call. “And I’m a man of my word. And now that the new prosecutor general is in place, we’re ready to move forward to signing that new $1 billion loan guarantee.” [Source]

May 13, 2016. Biden calls new Ukrainian President Poroshenko and expresses approval in the firing of Viktor Shokin who was investigating the alleged Hunter Biden. [Source]  Following the call, Biden approved a $1 billion loan guarantee for Ukraine, which he was withholding until the prosecutor was fired. [Source]

March 2, 2017. Dr. Farkas appeared on an MSNBC program saying, “I was urging my former colleagues, and, and frankly speaking the people on the Hill … it was more actually aimed at telling the Hill people, get as much information as you can, get as much intelligence as you can before President Obama leaves the administration.

“Because I had a fear that somehow that information would disappear with the senior people who left so it would be hidden away in the bureaucracy, um, that the [stutters] Trump folks — if they found out how we knew what we knew about their [the] Trump staff, dealing with Russians — that they would try to compromise those sources and methods, meaning we no longer have access to that intelligence.

So I became very worried because not enough was coming out into the open and I knew that there was more. We have very good intelligence on Russia, so then I had talked to some of my former colleagues and I knew that they were also trying to help get information to the Hill.”

Atlantic Council inks a deal with Burisma Group on January 19, 2017. 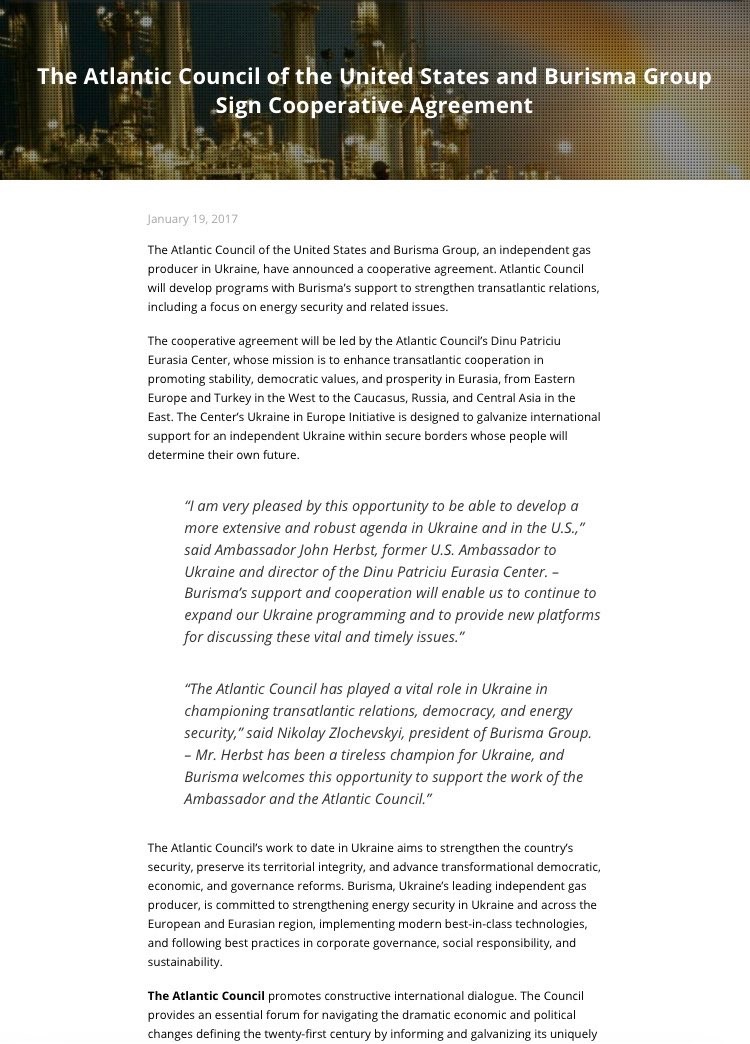 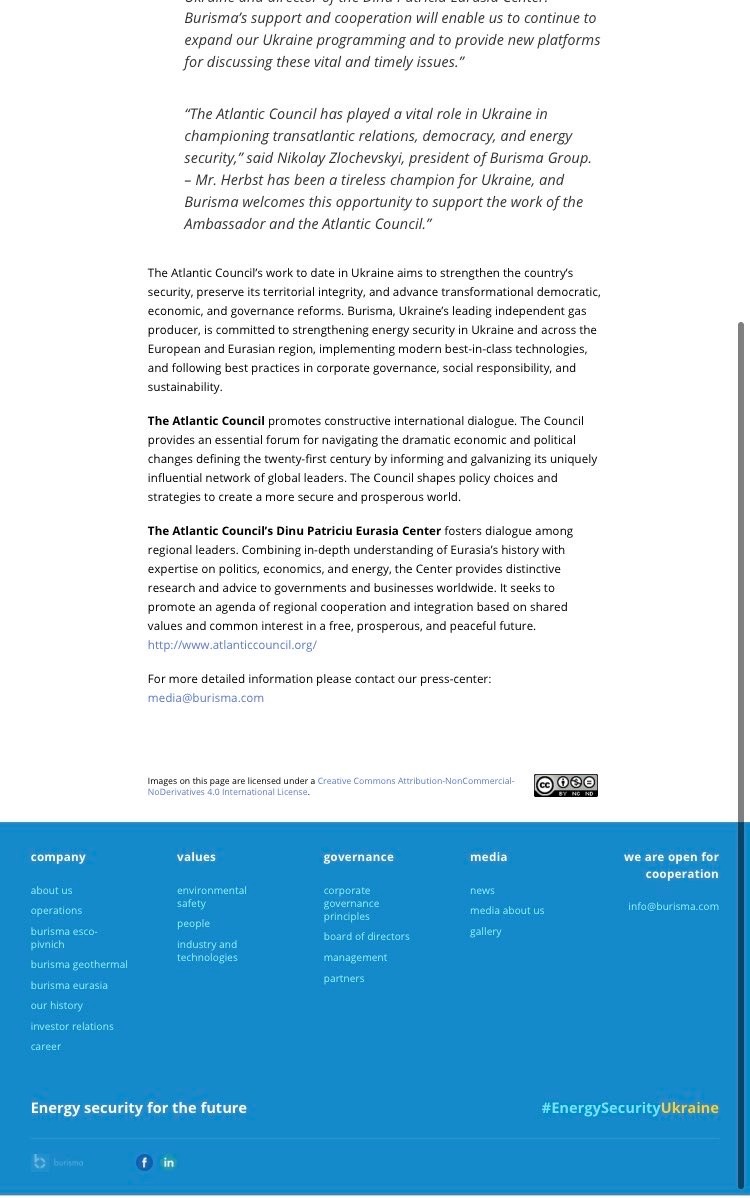 June 26, 2017.  Dr Farkas testified under oath that she lied during an MSNBC interview when she claimed to have evidence of alleged collusion.  [https://www.dni.gov/files/HPSCI_Transcripts/2020-05-04-Evelyn_Farkas-MTR_Redacted.pdf]

June 18, 2021. Evelyn Farkas was quoted as follows: “What I want is for Biden to very clearly explain what the risk is to Vladimir Putin, that we are not going to back down if we are attacked by Russia,” says Evelyn Farkas, who served as deputy assistant secretary of defense for Russia, Ukraine and Eurasia, “and that we’re going to be the ones that decide what a ‘cyber Pearl Harbor’ is, which means Russia doesn’t control the escalation dynamic.”  In the same article, Jake Sullivan also provided the following quote, “The way that I’ve consistently characterized our response when it came to SolarWinds and to other cyberattacks of that scope and scale is that we are prepared to take responsive actions that are seen and unseen,” White House national security adviser Jake Sullivan told reporters on Sunday, “and I’ll leave it at that.”  [https://www.newsweek.com/2021/07/09/will-putins-hackers-launch-cyber-pearl-harbor-shooting-war-1601791.html]

What does Evelyn know?

Who is really behind the Ukrainian conflict?

Are U.S. taxpayer dollars being used to fund organizations that are undermining U.S. citizens’ security and freedom?